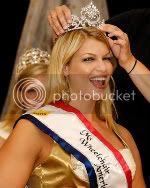 The Ms. Wheelchair America Program began in 1972 as a way to illuminate the achievements of women who utilize wheelchairs for 100% of their daily mobility. Accomplished women compete to become their state’s titleholder in order to participate in the national competition. They are judged, during personal and onstage interview sessions, based on their achievements since the onset of their disability, advocacy skills, and ability to overcome their physical challenges. The women are then asked to present a speech that highlights their chosen platforms such as women’s health issues or improved access in the community.


When asked about her pageant experience, Colvard said, “I love the idea of defying stereotypes and challenging misperceptions about women in wheelchairs – what we’re ‘supposed’ to do, look like, act like. Pageants are one of those things that women in wheelchairs aren’t ‘supposed’ to do, and just entering and competing in this pageant has been the experience of a lifetime for me.”

Bethesda, Maryland, July 26, 2008 – Michelle Colvard, the Executive Director of the City of Houston’s Office for People with Disabilities and Ms. Wheelchair Texas Titleholder, has been crowned Ms. Wheelchair America 2009. Having competed against extraordinary women of strength from across the country, Colvard was selected after a weeklong event to serve as a spokeswoman for people with disabilities. Over the coming year, she will communicate both the needs and the accomplishments of her constituency to the general public, the business community, and the legislature. She also will inform the able-bodied public of the achievements of people with disabilities, and work to promote awareness of the need to eliminate architectural and attitudinal barriers.

The crowning ceremony held in the Washington, DC suburb marked the eighteenth anniversary of President Bush signing the Americans with Disabilities Act.

For additional information and to schedule interviews contact Angela Wrigglesworth at 281-635-2032 or visit www.mswheelchairtexas.org.

ABOUT – The Ms. Wheelchair Texas Foundation is a not-for-profit 501(c)(3) organization that strives to improve the lives of people with disabilities through its mission of advocacy and education