By Lori A. Wood

For people with disabilities, finding a job is hard enough. Finding one that we actually like can prove to be much more difficult, and often, sadly, this requirement must take a backseat to more pressing financial considerations, such as attendant or child care. Rest assured, mobileWOMEN, all is not lost!
This mobileWOMAN  who, with great ambition, courage and determination, shows us that disability doesn't necessarily render these facets of employment mutually exclusive. Through volunteerism, this woman has found her calling, demonstrating that, when we do our part to help others, we reap some of life’s greatest rewards. 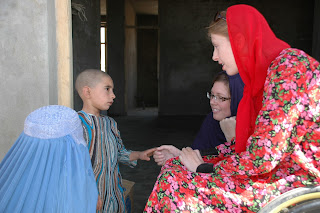 “I think volunteering is a perfect way to get into a job or career,” explains Jenny Smith, Member Care Coordinator of an international non-profit organization in Louisville, Kentucky. “I've held numerous volunteer positions, many of which led to discoveries of what I really enjoy doing. Volunteering can go on a resume just as well as a part-time job, and many times with volunteering, you don't have the responsibility that you do in a paid position. For example, if you need to go out of town, you have a bit more flexibility in scheduling your time.”


“I’d been a gymnast since I was about three years old. When I was sixteen, I was outside tumbling, and the grass was wet, so my feet slipped out from underneath me.” This left her a C6-7 complete quadriplegic. Bit by bit she has become more independent; she now lives on her own and has help three mornings a week with personal care.
“In 1998, I got to know some people from Poland, and I was asking them about accessibility in other countries, and how they go to school and work if places aren’t accessible. They said that people don’t even have wheelchairs, and that just floored me. I’d never heard that before,” she says. ”I was in graduate school at the time, and really didn’t have time to add anything else to my schedule.” A graduate of the University of Louisville, Jenny earned an undergraduate degree in Psychology and a Master’s degree in Counseling Psychology in December 1998. “Volunteering at the Crisis and Information Center in Louisville led to my Master's in Counseling Psychology. Volunteering with the adult education English as a Second Language program led to a paid position teaching Kindergarten through fifth graders for a year, while preparing me to work cross-culturally.”


“In 1999, someone from Louisville was going to Afghanistan as a volunteer with a non-profit organization to distribute wheelchairs. I didn’t know him at all, but I called him up and said, ‘I heard that you’re doing this, and I’d really like more information and to get involved.’ Then the vice-president of the organization called me and asked if I wanted to go on a trip with them. I honestly didn’t think I could travel internationally, but six months later, I was in Mexico for the first time.


While teaching ESL part-time, I began volunteering with the organization. After doing wheelchair collections and distributions, the organization asked me to consider becoming staff. This was a support-based position, meaning a “salary” is raised solely on a monthly basis through donations from individuals and churches. It was a huge leap of faith, but I decided to join the staff because of what the organization was all about.” 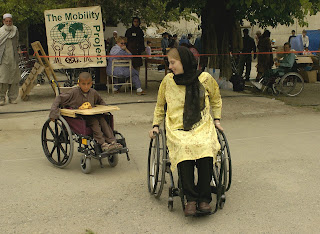 “The majority of people with disabilities who need help in the United States can get what they need. Dealing with Medicare, Medicaid and insurance companies can be a pain, and there are people who fall through the cracks, but the majority of people will get a wheelchair if they are seriously injured. In other countries, that’s not the case. The equipment simply isn’t available.”

Jenny maintains that the common causes of disability in developing countries are similar to those typically found in the United States. “There are developmental disabilities and spinal cord injuries due to accidents and adult-onset diseases. But the biggest difference is in Afghanistan where there are large numbers of injuries from the past twenty-five years of war.”

In working with a disability, Jenny has been lucky enough to find a balance between her personal needs and professional responsibilities. “My job with the organization that distributed wheelchairs worked out perfectly, because it was flexible. I've dealt with pressure sores in the past, so sitting up for long periods of time was a consideration. I worked from home, and could take a midday break in order to get off my bottom. While traveling, I had to push the limits a bit more, but since I worked with people who understood disabilities, they were understanding when I would say, ‘I have to get down.’”

In beginning her new position at an international non-profit organization, the staff was unaware of disability-related issues. Jenny took it on as her responsibility to educate them. “At this point in life, 20 years after my injury, I know my abilities, as well as my needs. I requested a 32-hour work week and asked if it was possible to work from home two days a week. They were willing to work with my requests. At the same time, I still feel a need to prove myself as capable and don’t want to be treated ‘special’ because I requested accommodations. I’m not a China doll; I’m not going to break. I want to show my co-workers and the leadership of the organization that I am capable and competent despite using a wheelchair.”

Fortunately, Jenny is able to support herself financially. “My current job still requires me to raise financial support. I have an incredible group of supporters, both individuals and churches that help me raise the money,” she says.

Still, she acknowledges one barrier to living independently—one that’s familiar to many people with disabilities. ”The one thing always in the back of my mind is health insurance. Thankfully, the Commonwealth of Kentucky has an insurance policy available to individuals who have been denied coverage or who have certain health conditions, including spinal cord injuries. It costs a lot, but I’m covered and it is good insurance.”

Her current position is to help cross-cultural workers stay healthy emotionally, spiritually and physically while working overseas. It doesn’t include collecting or distributing wheelchairs, but she continues to collect wheelchairs in her area and gives them to a nonprofit organization called Hope Haven International Ministries (www.hopehaveninternationalministries.org). “They do the refurbishing of the wheelchairs,” says Jenny. “Every part of the chair is refurbished before they go overseas. They’re reupholstered, given new tires, the brakes are checked to make sure they work correctly, and other little things that need to be worked on once in a while.” Hope Haven wants to get the word out to people who get a new chair and don’t know what to do with their old one. The last thing they want is for it to sit in the basement or up in the attic for years, not being used or, even worse, to be thrown out.

Jenny hopes to return to Afghanistan to distribute more wheelchairs – as a volunteer. “Funding is always the issue. Funds are needed to buy and ship the chairs, as well as to purchase plane tickets and have room and board in-country for a team of volunteers. The next time I go, I hope to distribute the RoughRider wheelchair by Whirlwind Wheelchair” (www.whirlwindwheelchair.org). This chair was designed specifically for use in developing countries where the terrain is rough and accessibility is all but non-existent. “Each chair costs $250. They are manufactured in developing countries and provide jobs to individuals with disabilities.”

“I think the fact that I use a chair makes a difference in the way the people that we help relate to me when I distribute a wheelchair, because I can speak from experience,” Jenny explains. ”If an able-bodied person tells me, ‘All you need to do is…’, I get frustrated, because it’s easy for them to say that. But a chair user has the experience. They've ‘been there, done that,’ and have earned the right to be heard.”

Seeing the living conditions of the disabled in developing countries makes Jenny realize how lucky she is to be living in the United States. “It makes me so thankful for what we have here. To see what others don’t have makes you really appreciate the things we do have.”

Please go to www.whirlwindwheelchair.org for more information on the RoughRider wheelchair or to find out how you can help provide wheelchairs to individuals with disabilities in developing countries.
Labels: archived, business and employment