Alana Yvonne Wallace is a multi-faceted artist who, along with Michelle Obama, received one of ten Phenomenal Woman Awards at The Black Women's Expo Gala in 2008. Alana currently appears in TV commercials for “Think Beyond the Label”— a national campaign to promote employment for people with disabilities.  She is also featured in the latest edition of “Who's Who in Black Chicago,” as an accomplished community leader.  A graduate of Columbia College with a BFA degree in Theater/Music, Wallace has served as Founder and Artistic Director of Dance>Detour since 1995.  She is a life-long disability advocate, speaker, actor, vocalist and dancer who promotes the inclusion of artists with disabilities in varied creative genres. Her disability advocacy passion focuses on promoting fully accessible housing and universal design.

Alana’s motivation for establishing Dance>Detour was to develop and encourage artistic collaborations between artists with and without disabilities who could work together to explore dance movement as equals.  She strives to expand the concept of what dance is and who can be involved. Wallace, who contracted polio at the age of five, has always believed she was born to perform.  She has found that her wheelchair is a beautiful accessory that afford her a unique opportunity to embrace and express dance. 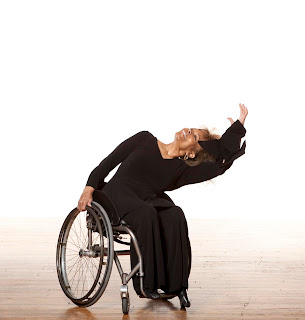 Wallace received the 2007 “Outstanding Leadership for an Accessible Society” Award from Community Service Options, Inc. and she was named one of the “100 Women Making a Difference” in "Today's Chicago Woman" Magazine in 1997. In 1998, she was featured in the Emmy Award-Winning PBS television documentary “Dance From the Heart” hosted by Ben Vereen. In 2008, Alana was the first African American to be crowned Ms. Wheelchair America in the 35-year history of the pageant.  Wallace is a national spokesperson, movement instructor, and performer who proudly displays her artistry in dance, acting, and singing as a testament to the talents and abilities of people with disabilities.

Recently, Alana was featured on the "Today Show", discussing the twentieth anniversary of the ADA, "Americans with Disabilities Act".  To view, click here.
Labels: archived, mobileWOMAN