Enjoy a Stress-free Thanksgiving Weekend with these Black Friday Tips

The holiday season is upon us. I’m not sure how this happened, considering it seems like yesterday that we welcomed in 2013, but of course they do say that time flies when you’re having fun. I guess there’s no reason to complain then, right? This is the time to be thankful, give thanks and eat a lot of turkey in the process. For many of us, we will be celebrating Chanukah simultaneously with Thanksgiving, which is exciting and gives the holiday extra meaning.

I’m not one you’ll find camping out for Black Friday deals. Is that because I’m not a fan of sleeping in my wheelchair on the sidewalk? Or perhaps is it because I don’t want to be knocked out of my chair as a stampede of people rush the Toys R Us entrance? Maybe it has more to do with my love of shopping online, actually, and less about the sleek new Ti-Lite that I use for mobility.

Danielle Sheypuk is a licensed psychologist, specializing in the area of dating, relationships, and sexuality among people with physical disabilities.  She currently practices psychology in New York City, where she obtained her Ph.D. from The New School for Social Research.

Dr. Sheypuk was diagnosed with Spinal Muscular Atrophy, Type 2, when she was three years old, and she has used a motorized wheelchair since then.  Her interest in the psychology of dating, relationships, and sexuality among people with disabilities began while she was in graduate school, where she uniquely combined her personal experiences and professional studies.While pursuing graduate studies, she once described her NYC dating and relationship experiences as “Sex and the City, disability style.”  She began to address the difficulties that people with disabilities encounter in this frequently ignored yet extremely significant aspect of their lives.  Although there have been many campaigns designed to improve public accommodations for people with disabilities, almost no attention has been paid to improving the quality of their romantic relationships.

Several published articles later, Dr. Sheypuk’s interest turned into a full-blown campaign after she snagged the title “Ms. Wheelchair New York” in 2012.  “I used this title to speak out on a larger level to change society's negative views of the sexuality of people with disabilities, to promote healthy romantic relationships, and to make dating someone in a wheelchair both desirable and sexy,” Dr. Sheypuk told the press.  Since then, she has found herself in demand from a variety of media focused on her particular area of expertise.
Read more »
11 comments
Labels: archived, mobileWOMAN, sexuality and relationships

Fall is definitely here! You can see it in the beautiful colors of the trees and you can feel it in the chill in the air.  Whenever this time of year comes around, I always turn to comfort food. One of my favorite things to make is chili. But I wanted to do something a little different than my usual chili; I wanted to utilize some of the fall vegetables that are in season. As luck would have it, a dear friend gave me this recipe that does just that, and it’s easy to make. The recipe is for Slow Cooker Turkey, White Bean and Pumpkin Chili! Yes pumpkin!
The bright orange color of pumpkin indicates that pumpkin is loaded with an important antioxidant, beta-carotene. Beta-carotene is one of the plant carotenoids converted to vitamin A in the body. In the conversion to vitamin A, beta carotene performs many important functions in overall health. Research indicates that a diet rich in foods containing beta-carotene may reduce the risk of developing certain types of cancer and offers protection against heart disease, other diseases as well as some degenerative aspects of aging.
So not only is it healthy but I decided to give it a try and it was DELICIOUS! So here’s my next Mobile Friendly Recipe: 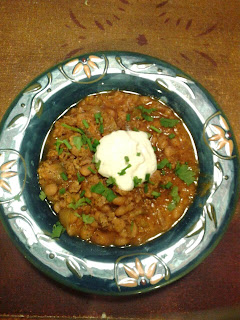