Soaring on Ice for Gold! 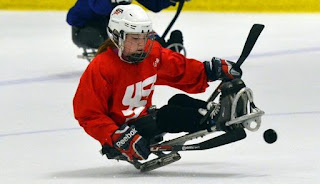 Kelsey DiClaudio has her eye on the prize.  At 18 years of age, she is looking to make the Paralympic Games in 2018 and head to South Korea playing Sled Hockey.  A fast paced game that follows the same rules and speed as stand up hockey, Kelsey and her teammates participate in a full contact sport that is modified on sleds and is tailored to fit the specific athlete perfectly.  As Kelsey speeds through her game, she uses two hockey sticks with picks to get around on the ice. The motion she says is a lot like skiing and she loves how fast and physical it is and how free she feels when she’s on the ice. Playing since the age of 8, Kelsey did not realize how important this sport would become and finds beauty in it that most may miss when watching the game played.

Although born without any signs of living with a disability, Kelsey says that as a newborn doctors discovered that she had a tethered spinal cord which is a neurological disorder caused by tissue attachments that limit the movement of the spinal cord within the spinal column. She had her first back surgery as a newborn which was a tethered cord release.  But after that and four more back surgeries to follow, her spinal cord kept re-tethering and Kelsey became more paralyzed from the waist down as each surgery was had. In the summer of 2012, Kelsey had her final back surgery which was to diminish back pain. “I was able to walk short distances before the surgery, but afterwards, ended up losing my ability to walk and the pain was not diminished.” Kelsey would tell the doctors before that surgery, that as long as she was able to play sled hockey she would be OK.  She’d even sneak out of the hospital at times to go play hockey and says it was the best medicine for helping her to get better moving forward.

Not only is Kelsey breaking barriers as an athlete with a disability, but also as the only female player on her home turf with the Pittsburgh Penguins Sled Team that she has been with for the last 8 years. Currently, Women’s Sled Hockey is still in its growing stages but has made progress over the past couple of years and is continuing to grow moving forward.  But for the moment, Kelsey’s club that she plays for is a men’s team and her opponents are all men as well. So when Kelsey plays, she feels she must prove herself on the ice and doesn’t want anyone to take it easy with her when she’s out there.  “You can’t improve if you’re not challenged and so I play hard and give it my all   “One of Kelsey’s main goals with the sport she loves is to grow the game for girls and women. “I want more females to have the chance to play this incredible sport and not feel that they can’t.” 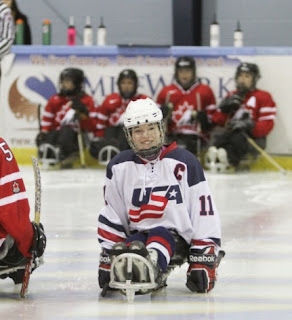 And if any proof in the pudding is exemplified, an example of success that Kelsey experienced came in 2014 when she participated in the Inaugural Paralympic Committee Ice Sled Hockey Women’s International Cup in Canada in which she scored 4 goals and had an assist in the 5-1 victory.  An incredible honor, Kelsey felt pride in representing her country on the world’s stage and the energy followed her when they were coming out of the locker room.  “We were determined to win and did what we came to do.”  Kelsey shared that she couldn’t have scored any of the goals without her teammates and incredible coaches.  “We came out flying in the first period and worked really hard at both ends of the ice to come up with the win.”

In addition to playing for her club team, Kelsey is the only female on the U.S. National Men’s Development Team and is in her second season.  Feeling honored to play for this organization, Kelsey says she is treated as an equal on and off the ice. And once on the ice, the team is not separated by gender or politics and believes that sport doesn’t see gender but passion alone. And since watching the 2010 Vancouver Paralympic Games, Kelsey has made it her goal to get to the Big Dance.  “I need to work hard in the gym and keep playing hard in order to accomplish my dream of getting to the games in 2018.”

When asked how she views her disability, Kelsey feels it has taught her that things could always be worse and to always look at the bright side of life.  “Even if I had the choice to get rid of my disability, I would refuse.” Without her disability, she says she wouldn’t be able to play sled hockey and experience so many different things. “I consider myself lucky to have the opportunities my life has given me.”

And as a role model to girls and women with disabilities who may want to play sled hockey or other sports, Kelsey’s advice is to never put limits on the possibilities that are out there.  “Fear can kill a lot of dreams and you never know until you try.”

Moving forward 10-15 years, Kelsey sees herself still playing ice sled hockey, even at a competitive or recreation level. By then, she hopes to have accomplished her dreams of getting to the Paralympics and winning gold.  ” I know for a fact that I’ll still want to be involved in the sport of sled hockey either as a player or even a coach.” She also hopes to go to school to become a recreation or occupational therapist.  But no matter what the future holds, Kelsey will always want to give back to the sport that she loves and has already given her so much.

Although Kara has Osteogenesis Imperfecta which simply means brittle bones, Kara has studied dance for over 16 years now and currently dances with American Dance Wheels Foundation. But for the bulk of her dance career she danced with Kardon..  Kara works as a licensed therapist part time at an inpatient mental health facility and as a Free Lance writer for Montgomery County Community College.  She also sings with the Academy Chorale as the arts are an important part of her life.