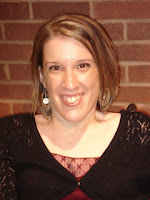 by Amy Saffell
Every wheelchair user knows the perils of shopping for clothes. Clothes right off the rack at the local mall often either don’t fit well, don’t look right sitting down, or are hard to get on and off, leading either to expensive alterations or to just giving up and resorting to wearing clothes that the person really doesn’t want to wear. It often seems like designers don’t give a second thought to the different needs of people with disabilities. Thankfully, we see a glimmer of hope that fashionable clothing is becoming more functional for people with disabilities thanks to renowned Canadian fashion designer, Izzy Camilleri. 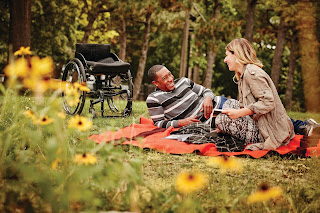 Camilleri is known in Hollywood for having worked with A-list celebrities like Angelina Jolie, Meryl Streep, Nicole Kidman, and Kelly Clarkson, but after being asked to style a Canadian journalist who was a wheelchair user, she began to see fashion differently. She realized the void that existed in fashionable clothing that fit the needs of people who sit all day and who may have other disability-based functional needs, and  she decided to do something about it. Through her work with the Canadian journalist and subsequent focus groups of people with disabilities, Camilleri began to understand that there was a large segment of the population that didn’t have access to the kinds of clothes she had been designing for years, people who wanted very much to feel included among those who could wear stylish and professional looking clothing. She learned the unique needs of wheelchair users and soon launched her brand, IZ. We asked Camilleri about the development of IZ and about her new campaign, Access10, where 10% of every product purchased from IZ’s 2015 Fall Collection and 100% of profits from the “Fashion IZ Freedom” t-shirt will go towards increasing accessibility in North America by partnering with organizations like Stop Gap to build ramps in inaccessible areas. 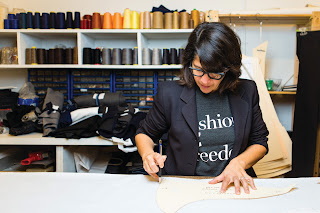 What was your initial reaction to working with the Canadian journalist who was a wheelchair user? What did you learn from her, both in terms of some of the physical needs in fashion for people with disabilities and the more sociological aspects? How did you come to embrace that fashion for people with disabilities is important?
My initial reaction to working with my first seated client was that her clothing needs were no different than mine.  I learned a ton from her and the experience was very eye opening.  I became a sponge, wanting to learn more about how her clothing needs were indeed different than mine and what those differences were.  I learned how difficult it was for her to physically get dressed, how limited her clothing  options were and that due to those limitations, it affected her sense of self when it came to making fashion choices from what little choice there was.
When I realized that the choices were so limited, I decided to take on the challenge of creating clothing for wheelchair users.  I starting with everyday basic’s that are staples in everyone’s wardrobe, but redesigning them so they worked for a seated frame and for those that needed help in dressing.  I soon realized that the clothes were secondary to what they delivered in terms of what they delivered emotionally:  sense of self, dignity, confidence and inclusion for example. 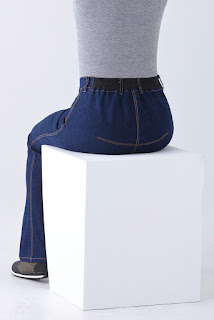 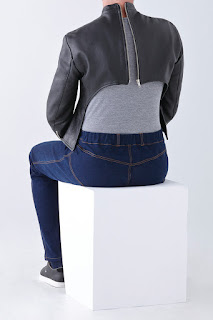 There are so many different needs within the disabled community related to fashion because everybody’s body is different. After you worked with the journalist, how did you go about learning about other types of disabilities and needs?
I learned client by client, but soon understood, that on the most part, although there are different conditions and injuries, our bodies are mostly physically the same, it’s the function of the body that differs.  Once I came to that realization, it allowed me to generalize a bit more.  However, designing for people that sit all day raised different issues such as pressure sores and organ settling that also needed to be considered in the design of the collection. 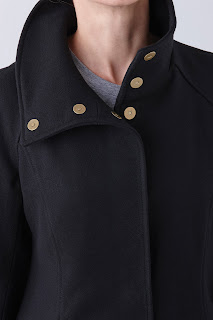 Have you faced any barriers with your colleagues in the industry understanding that fashion for people with disabilities is important? Or maybe you’ve found other barriers?
Initially, the fashion industry didn’t understand what I was doing as it was a huge departure from the work I was known for.  They (fashion industry colleagues) became distant, feeling that I was no longer doing ‘fashion’.  So yes, barriers did come up, which I didn’t feel mattered... I knew what I was doing was important and what they thought was irrelevant.  Now however, those same people are coming to understand that what I’m doing is fashion and something that is long overdue. 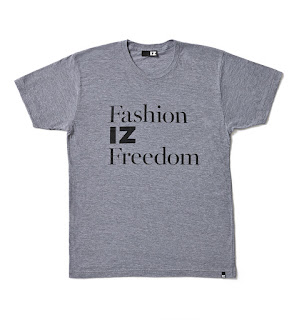 Tell me about some of the design features of your clothing that makes them more conducive to people with disabilities.
The clothing is uniquely drafted and cut to follow the line of a seated body.  Regular clothing is cut to follow a standing frame, which may not work well when seated all day or becomes binding around the waist, bunchy or uncomfortable.  The clothing is made to go on and off easily while working around the parameter’s of a person’s wheelchair as well as their ability. 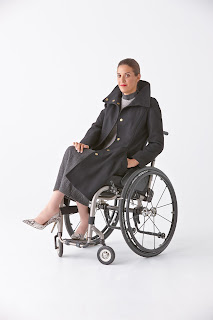 Tell me about the Access10 campaign.
Access10 is a way for us to give back to our clients in a way that benefits them.  10% of all IZ sales go towards Access10.  We currently have a T Shirt campaign on right now called "Fashion IZ Freedom".  100% of the proceeds of the sales of these tees also go towards Access10.   Our initial partnership is with Stop Gap, a nonprofit organization that builds ramps for businesses here in Canada.  Stop Gap is expanding into the United States. 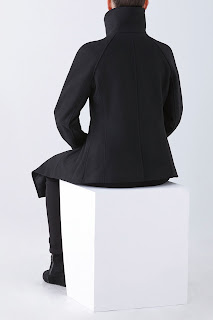 What are you working on next with your clothing line?
We are currently working on Spring 2016 for the IZ Collection.  New designs and concepts are always happening as we find new ways to do what we do.  We also learn from our clients, who share their experiences with clothing and how we can improve their standard of living through our offering.
To learn more about IZ and Access10, visit http://izcollection.com.
Labels: archived, beauty and fashion