One Comic’s Journey to Inclusion: One Laugh at a Time


Since joining mobileWOMEN.org, I have had the great pleasure of interviewing some amazing women for the website. My journey has included athletes, a designer, a photographer who is a friend of mine, and the hilarious comedian Shannon Devido. But having the opportunity to interview comedian Maysoon Zayid has been a dream of mine for some time.  First learning of her from her TED Talk in 2013 entitled, “I got 99 problems…palsy is just one,” I have been a fan ever since. And Ms. Zayid is not just a comedian, but an actress and activist who is changing the world with every laugh she creates.

Born with Cerebral Palsy, in the great state of New Jersey where she still resides today, Ms. Zayid explained in her TEDTalk that she learned to walk as a child by placing her heels on her father’s feet.  Ms. Zayid, whose Palestinian parents immigrated to the United States, is the youngest of four girls.  Her father was a traveling salesman and her mother is Chief of Lab at a large New Jersey Hospital. Ms. Zayid states that it was her grandmothers and aunts who were a very big influence in her life: “I spent summers with them in Palestine with no TV. That is definitely where I learned comedy. They would gossip about other villagers and it was hilarious.”


She also shared from her TEDTalk that her summer vacations consisted of her father trying to heal her by having her drink deer’s milk and being dunked in the Dead Sea where the water burned her eyes. In addition, her parents couldn't afford physical therapy, so she was sent to dancing school where she learned how to dance in heels, which in turn means she can walk in heels, she states. “And I’m from Jersey, and we are really concerned with being chic, so if my friends wore heels, so did I.” In addition to learning to walk by the aid of her father, Ms. Zayid jokes that if that hadn’t worked, another tactic used was dangling a dollar bill in front of her and having her chase it.


In her later years, Ms. Zayid attended Arizona State University, where she earned her BFA in acting. Upon moving back home, she obtained her first acting gig as an extra on the soap As the World Turns. But instead of advancing in her acting career, she states that she felt she was a glorified piece of furniture that one could only recognize from the back of her head.  “It became clear to me that casting directors didn’t hire fluffy, ethnic, disabled actors.” Only those of a certain perfection, she would go on to say.  But as with anything, there are always exceptions to any rule.  Growing up, she was a fan of watching great female comedians such as Whoopi Goldberg, Roseanne Barr, and Ellen, and the one thing all of these women had in common; they were comedians.  “So I became a comic and have been one now for sixteen years.”  Her first gig in the comedy world was driving famous comics from New York City to shows in New Jersey. “I’ll never forget the face of the first comic I ever drove, when he realized that he was speeding down the New Jersey Turnpike with a chick with CP driving him.”


In her TEDTalk, Ms. Zayid goes on to say that her crooked journey has taken her to some very spectacular places.  “I got to walk the red carpet flanked by soap opera diva Susan Lucci and the iconic Loreen Arbus.” She also goes on to say that she has acted in a movie with Adam Sandler and worked with her idol, the amazing Dave Matthews.  “I toured the world as a headliner on Arabs Gone Wild and was a delegate representing the great state of New Jersey at the 2008 DNC. 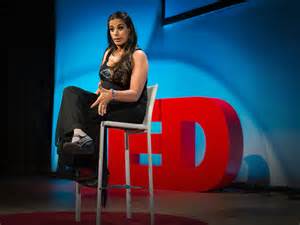 And her TEDTalk, which again aired in December of 2013, was an amazing and intimate discussion of her life through comedy and heart.  When going into it, she states that she had no goals and did not understand the magnitude of it.  “I had met with Pat Mitchell, who curates TEDWomen at my friend Loreen Arbus’ home and she invited me to do a TEDTalk." She approached it the way she would approach any other performance. “I am sometimes embarrassed when people ask me what my TEDTalk is about because, for me, it was just about making people laugh, nothing very deep.” She says that often people hear the Talk they want to hear.  Muslims think it’s about Islam, her fellow disabled find it empowering and others are mesmerized by her tank top.  “They hear and see what they want, not necessarily what I wanted them to see, and I know this because so many people insist on calling my Talk inspirational, when I clearly stated that was not my goal.”  Meanwhile, so many people ignore the center piece of the Talk, which is a call to ending able-bodied actors playing disabled on screen.  “People who swear they have seen my Talk, act surprised when they find out I advocate for authentic casting.”


This important piece to Ms. Zayid’s passion is why I wanted to do this interview: her advocacy for authentic casting of people with disabilities playing actual roles.  But how does one go about making change in an industry that has struggled with diversity as a whole? Ms. Zayid states that actors who are not disabled must turn down such roles when offered.  As in the early part of film when white actors would put on makeup to portray black actors, for example, Ms. Zayid feels that this must also be understood when it comes to playing actors with disabilities. “Too often we are desperate for representation, that we accept the fact that not only are we shut out from disabled roles, but that we are also shut out from being mainstream in Hollywood.” Ms. Zayid feels it is time for shows like “Scandal” or “The Big Bang Theory” to be held to a higher standard and have cast members with disabilities represented on their shows.


Another passion for Ms. Zayid is standing up against bullying.  “I fight bullying because I know there are people who do not have the power to do so.”  During her talks, Ms. Zayid tells her audience “don’t be a bully and don’t raise a bully” because bullying is a learned behavior.  “My advice to those being bullied is ignore it, as these people have no effect on your life unless you give them the power.” She also goes on to say that they are not friends, nor will they ever be, so the best thing one can do is to ignore them because it takes away their power.  “If you let them affect you, they win. Don’t let other people define you, as only you get to define you. If you can’t find friends in real life, find a community online that you identify with and that empowers you.”  But although online communities can be positive, she also offers caution to be aware of who is out there and to stick with groups where members have verifiable public personae.


When it comes to performing, Ms. Zayid packs a busy schedule.  The number of shows she does a week varies, but on average she does two to three per week, and about ten per month. “It is a lot more than it sounds like, because I often have to fly to do my shows.”  And when it comes to comedians who inspire her, big names such as Carol Burnett, Richard Pryor, Jon Stewart, George Carlin and Margaret Cho come to mind. “And the entire cast of General Hospital for the past three decades.”


And what advice does Ms. Zayid give to up-and-coming comedians who live with disabilities? Simply stated, she advises young comedians to be a comedian, and not to see themselves as a comedian with a disability. She goes on to say that people can joke about their disability, but if it is all that is talked about, the audience will get bored quickly.  Important advice to live by, from a comedian who is a class act all her own.


Maysoon’s Kids which is a charity for kids with physical disabilities to be mainstreamed into the Palestinian Public School System. Go to http://www.maysoon.com/pages/maysoonskids