Photography and Birding: A Recipe for a Meaningful Life

Recently I had the honor of interviewing Ann Marie Geiger, an avid bird watcher and photographer who is a Renaissance woman in her own right.  Born with Osteogenesis Imperfecta, a bone condition that causes people to experience a few to as many as a hundred fractures, usually occurs before adolescence. Ms. Geiger is short-statured, uses a wheelchair for mobility and has experienced around 70 fractures in her lifetime, but she doesn’t let the pain of those years hold her back from living life and doing what she loves.  Now in her mid-50’s, Ms. Geiger lives in an impressive in-law suite located in a Montgomery County suburb of Philadelphia PA, connected to her sister’s house which they built together, her part made accessible for her personal needs.  Her portion of the house includes 3 bedrooms, 2 baths which are wheelchair accessible, a sunroom, a living room and a spacious kitchen with low countertops, stove and oven. In addition, her little family includes 2 dwarf rabbits, Popcorn and Bunson, a yellow Parakeet named ChiChi and Smuckers, a Cockatiel who has a keen knack for picking up words and voices that will make you laugh and scare you all in the same moment.  Smuckers’ vocabulary includes “pretty bird”; “come here”; “what a pretty bird you are”; and “I’m a pretty little bad bird” a phrase one won’t soon forget!

Ms. Geiger, a graduate of Widener University with a B.S. in Biology, has recently retired from Merck after working there for 32 years.  She started her career at the pharmaceutical working in the lab and later moved into Technology and Quality Control areas, supporting their manufacture of vaccines.  Her time within these departments involved issuing and processing documentation, much computer work and making sure required procedures were followed accurately.  Merck provided accommodations where needed, including modifying restrooms, making heavy doors automatic and purchasing an electronic desk which could be lowered to her level. In addition to an impressive career, she has quite a large family which includes two sisters, a brother, 10 nieces and nephews.

Ms. Geiger’s love for photography began back in high school where she attended Upper Merion and took a photography class. When working in the dark room, Ms. Geiger goes on to say that they did not have to modify her working space much other than to make room for her to maneuver with her wheelchair. Already an avid animal lover, her first photographs solely included her cat, Katrina and hamster, Chopper.  “Other classmates brought in photos of their families, but my favorite thing was my pets.” Her love of animals soon grew into a passion with photographing them, especially birds.  “Because of my bone disability, I was often isolated at home healing from a fracture and so my parents bought me a bird feeder that was placed outside my window.  The birds that came became a beautiful distraction and comfort for me and even though I was isolated, I didn’t feel so alone.” Watching the birds became a positive focus for Ms. Geiger and she strongly feels that it was her disability that led to her love of nature and later possibly even to her career in biology.  Ms. Geiger was awakened to a fascination with all animals, not only for their beauty, but how they function, as well.  For example, as a child, she had a finch as a pet, which years later led to a hobby of breeding exotic finches for a 25 year period, for a while having over 60 finches!
Now, she not only loves taking photos of birds, but flowers, insects, dragonflies, butterflies and anything else that grabs her eye. At the beginning, she was limited to her backyard, but once she began to drive at the age of 21, she expanded her subjects.  She often uses her car as a blind, so the animals don’t feel threatened when she photographs them.  Local places she likes to visit to photograph her subjects include John Forsythe Refuge in New Jersey and Bombay Hook Refuge in Delaware.  Both refuges have dikes to drive on where she can birdwatch and photograph.  She also enjoys visiting Cape May Point State Park because they have an ADA wheelchair accessible hawk watch and boardwalk trail, where she can get out and wheel her chair to get even closer to nature and enjoy.  Sometimes, she even gets out of her wheelchair and onto the ground to get up close to flowers, insects, chipmunks etc., and bring their color and beauty to life.
In addition to photography, Ms. Geiger loves to travel and does much of her traveling solo.  She goes on to say that with solo trips, because of her fragile bones, she does much research online and makes phone calls over several months to make sure these trips are accessible and safe.  Places she has traveled to include the Florida Everglades National Park and has been there twice thus far.  She reports that there are multiple ADA accessible birding areas there and the birds in Florida are much more comfortable with people coming towards them.  She also visited Corpus Christi and Port Aransas Texas where she saw the endangered Whooping Cranes. She visited some locations on her own, but also hired a professional birder to take her out for two days.
Last year, she visited Tucson AZ where she enjoyed some day trips out on her own visiting the Arizona Sonoran Desert Museum and Tucson Botanical Gardens where she photographed flowers, lizards and birds. For two other days, she hired a professional birder who took her out exploring cactus country, the Catalina and St Rita Mountains, Madera Canyon and the town of Patagonia near the Mexican border. She goes on to say that she added over 40 new species of birds to her life list, including 7 different kinds of hummingbirds and saw everything from Cactus wrens, Quail and a Golden Eagle.  Ms. Geiger has further expanded her photography and birdwatching by taking cruises and cruised her way to the Panama Canal (2 times) with stops at several islands including Costa Rica.  She has also taken a Caribbean, an Alaskan and Bermuda cruise.

When it comes to displaying her work, Ms. Geiger has exhibited her photographs at the annual Art Ability Show at Bryn Mawr RehabilitationCenter in Malvern Pa. There, she and other artists with various disabilities display art, jewelry, sculpture, photography etc. Ms. Geiger says she has sold some of her photographs, but also goes to craft shows to sell some of her work as well.  Last summer, she was part of Lansdale Festival of the Arts.  She says she loves people getting something positive out of her work.  “It’s a challenge to get a photograph that inspires or awakens others to the beauty of nature.” When it comes to shooting her work, she uses a 70-300mm telephoto lens and Canon digital camera that is around 2lbs combined (about the most she can hold).  She switches to a macro lens for insects and flower details.  Because it is hard to hold a heavy camera steady for sharp photos, she is going to try a newly purchased contraption – a flexible arm that clamps to her wheelchair and holds her camera at eye level.  And although she doesn’t have too much of an issue with using her hands/arms when photographing, she finds the biggest obstacle is finding accessible terrain and even then, often the ADA paths end and the rough terrain begins.  Any wheelchair user would agree, it’s not the easiest wheeling through the woods, chasing after models who would prefer to get away instead of turning around and posing for the camera.  But she does the best she can.
Ms. Geiger is very thoughtful when she shares what she would tell parents of children with disabilities in order to help them to find their passions. “If you see your child showing an interest in something, cultivate that passion. It will give them something to nurture or a way to express themselves.
To end, Ms. Geiger shares that having a passion has provided her with much comfort, peace and joy in the sometimes hectic and rocky world.  It has nurtured her spirit and provided tranquility whether times are good or rough going. “I believe everyone needs a passion in life, and when you find it, you have to make time for it no matter what.” 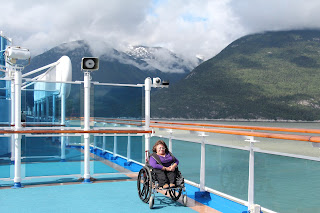 About the author:
Although Kara has Osteogenesis Imperfecta which simply means brittle bones, Kara has studied dance for over 16 years now and currently dances with American Dance Wheels Foundation. But for the bulk of her dance career she danced with Kardon..  Kara works as a licensed therapist part time at an inpatient mental health facility and as a Free Lance writer for Montgomery County Community College.  She also sings with the Academy Chorale as the arts are an important part of her life.