The Raw Beauty Project, an innovative arts project that celebrates women with disabilities, educating viewers to redefine perceptions and beauty, unleashing potential for all. This photography exhibit is a collaboration between professional photographers and women living with various types of disabilities that showcases their beauty, power and passion.

The result is a powerful and impactful tool for education, self-acceptance and empowerment. The viewers, not only learn about women with disabilities but also often learn about themselves and are motivated to overcome the challenges in their own lives. On September 20, 2014, The Raw Beauty Project was debuted in Manhattan.  The exhibit has resonated with media across the world, igniting a global conversation and has been featured in Oprah Magazine, TODAY.com and Huffington Post, to name a few. You can see a full list of the media on the website.  Thus far, Raw Beauty Project NYC has been to Miami, New York City and Washington DC.

Monique Stamps was one of the models that was featured in the NYC exhibit. Monique had plans to become a hairdresser and makeup artist, when she became paralyzed in a car accident, at the young age of 16 years old. After a period of adjustment and hard work , she graduated from college as a social worker and worked for the next 10 years at an Independent Living Center, where she connected with other women with disabilities. Empowered through these relationships, she wanted to create a group where women could support one another in coping and learning creative strategies while living with a disability.

As a result, she started a sister chapter of Women Embracing Abilities Now (W.E.A.N.)  in Charlotte NC, Among many initiatives, the group advocates for equal access to breast and OB/GYN medical care and educates the community about the high rates of health disparities for people with disabilities. Monique says, “I believe that there is a sisterhood among women with disabilities and it is important to share our stories with each other. I want us to be seen and treated just as intelligent, valuable, beautiful, sexy, and as sexual as women who do not have a disability. But we have to help each other see it first. I do what I do to bridge the gap; help build a trust among us, and to reframe the initial pain into power. Turning pain into power is the mantra that gives me strength.”
It is with this philosophy and fortitude that Monique decided that she wanted to become an ambassador of The Raw Beauty Project and create a new exhibit with new models and photographers, in her hometown, Charlotte, NC. After many months of coordinating, canvasing for sponsors, photoshoots, outreach and much more, Monique and her team are excited to launch The Raw Beauty Project Charlotte on June 18, 2016 at 7:30pm at the Dupp & Swap Art Gallery. Ticket price is $50/person and proceeds will support W.E.A.N. Charlotte. Click here for tickets and sponsorship options. For more information, please contact Monique at rbpcarolinas@gmail.com.

One of the highlights that evening, will be a performance by an award-winning Gospel singer, Kebra Moore, who also happens to be one of the models featured in the exhibit. Fittingly, Kebra will sing her empowering debut single, “Beautiful”! When asked about her thoughts on being a model for The Raw Beauty Project she stated, "Beauty is in the eye of the beholder.  I tend to focus more on self-esteem and self-confidence. This to me is Raw Beauty. To be a model, is an outwardly expression of self-art and music.”
Read more below about this talented, influential woman below in her biography, shared from www.kebramoore.net

By design, life wasn’t intended to be fair. Good things happen to bad people and bad things happen to good people. By human nature, if we continually do good deeds, live a life that is driven by high morals, and commit ourselves to a selfish lifestyle whose impetus is based upon altruistic and philanthropic principles then, by default,  we should be exempt (or at least expect to be) from the most draconian circumstances that life has to offer. Sadly, this has never been nor probably ever will be the case. Unfortunately, it is one of those curve balls of life that we are helpless to defend against. Thankfully, what we can exert control over is how we deal with these situations. The story of Kebra Moore is a glaring example of how someone who is subjected to even the most inimical circumstances can still prevail triumphantly and, in like kind, send life’s curve ball sailing over the centerfield wall.

In 1999 the world was Kebra’s oyster and she was determined to make pearls of it. Vibrant, beautiful, determined, intelligent, and with a voice that could stop traffic, she was at the beginning of a career that showed great potential and even more promise. Then life, looking to make an example of one God’s chosen, reared its ugly head. On Christmas Eve of that year Kebra was traveling back from New Orleans to Arkansas with her 14-month old son and fiancé to make final arrangements for their upcoming wedding in just a couple of weeks. Their car was involved in a devastating accident that miraculously did no harm to her son and fiancé but, unfortunately, left her as a paraplegic. That is where, as Kebra boldly stated, “the devil messed up badly. He should have killed me.”  She recounts how when she was becoming a member of Delta Sigma Theta Sorority, Inc. at Claflin University that she had to learn the poem Invictus by Sir William Earnest Henley. During the most arduous episodes of her ordeal she would constantly recite the last verse of that poem and Luke 1:37, one of her favorite Bible verses: “I am the master of my fate, I am the captain of my soul” and “With God, nothing is impossible.” In an earlier interview Kebra, once stated, “It’s funny how life tries to grab you by the reigns and dictate the terms of your life based on a single traumatic event, but for me I am a God fearing woman and I don’t expect life to be a bed of roses. It wasn’t for Jesus and he was perfect, so why should I be an exclusion to the rule?”
Kebra’s accident (or blessing as she now refers to it) instilled in her an even greater resolve and determination. Failing was clearly not an option. As a matter of fact, her accident accelerated her determined mindset to beat the odds. Her husband jokingly once said, “Keb was always a busy body and constantly on the go and now that God has replaced her legs with wheels, I often find myself completely out of breath just trying to keep up with her…and I’m a Marine  Master Gunnery Sergeant!” 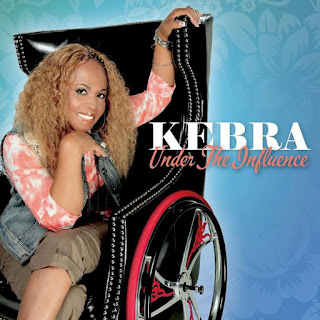 As a songstress, writer, and musician today you can find Kebra traveling throughout the US on various motivational speaking campaigns and singing engagements. Her slogan, Ability Not Disability, speaks to her life of not making excuses but seizing opportunities. As Miss Wheelchair Mississippi 2013 Kebra has made it her mission to raise awareness not only for service members or people with  physical or mental disabilities,  but also for addressing the youth and young women throughout America on living a God-first life. She even gained national acclaim as being the cover girl of triumph and success. One of her debut songs, “He’ll Make a Way” was even featured on President Barack Obama’s documentary soundtrack Becoming Barack: Evolution of a Leader and her debut single “Beautiful” , which also appeared on BET and TBN, captures the beauty in all humanity. For Kebra, beauty is not confirmative to what the world mandates. That mold has to be broken. “It is important to embrace the beauty, talent, style, and character that not just celebrates the uniqueness of you but, most importantly, the uniqueness of the God in you.”

Recognized for her beautiful voice, Kebra has had the great fortune to appear on the Dr. Bobby Jones’ Gospel Hour. In addition to having her many accomplishments mentioned in F.A.M.U.’s African American studies text From Imagining to Understanding the African American Experience her song Troubles was a nominated for B.E.T.’s Music Award for Best Gospel Song and Video.

It is likely that at some point, perhaps even in a city near you, that Kebra will be speaking on the goodness of life, in spite of. In January 2014 she launched her Beautiful Campaign which places attention on educating people who have suffered injuries such as hers and that their disability is not a state of the body, rather a state of the mind. This year as I travel throughout the US meeting people in injury hospitals, rehabilitation centers, and disability expos, I want them to see that success moves far beyond a pair of arms or legs. “There is so much more to transcending expectations than having the ability to standing upright. God never intended it that way and as long as there is breath in my body, I will forever be campaigning to the world that everyone is “uniquely you” and if your mind can conceive it, your body, regardless its condition, can achieve it.”

Well said, Kebra. Well said. And whether you are standing to your feet or sitting in a wheelchair, your success and determination deserves a resounding ovation.