"When I began water therapy," said Beth, "no one expected me to ever move in the water without someone holding me up."

My youngest child was paralyzed in a car accident near our hometown in Ohio. We became a team. In the rehab pool for physical therapy, Beth, fourteen years old and a new quadriplegic, tried and failed to stay afloat. Weeks later, I watched her float on her own with her arms gently waving under the surface.

“I immediately loved the water and the freedom I had in it.”

Two weeks before our first wheelchair games, Beth figured out how to accomplish a sloppy backstroke without sinking. A coach at the games encouraged us to attend a national swim meet to “see the possibilities.” We learned that competitors in my daughter’s S3 classification were few and far between. She asked to work with a coach, determined to swim the forward strokes.

“I started doing the backstroke. Then, learning to swim on my stomach and still breathe was a big challenge initially.”

Not a swimmer before her injury, it took weeks of failing, again and again, before Beth managed to move forward on her stomach just a meter or two—not even attempting a specific stroke. Over months, she gradually extended the distance. Then, over years, she learned all of the strokes, each modified to her abilities by an exceptional hometown coach, Peggy Ewald.

“I basically swim with my upper body and pull my entire body with my arms. Since my hands can't cup the water, my arms do all the work. It would be something like an able-bodied swimmer with their legs tied together and their hands in fists.”

Peggy coached the high school swim team and encouraged Beth to join for her senior year. My daughter competed in the unpopular events, like the butterfly. The top three swimmers scored in each event at meets, so as long as she finished, she scored points. I added to the applause from the other spectators.

“It's fun climbing out of the pool and hearing people clapping for you. It gives you a little boost of confidence.”

As a freshman in college, Beth was team manager for Harvard Women’s Swimming and Diving (HWSD). In the spring, she was invited to be a full member for her last three years of college, the first with a visible disability. She also competed on the U.S. Paralympics National Swim Team and, over the summers, on the Seneca Aquatic Klub in Tiffin, Ohio.

“I couldn’t imagine a better college experience and a large part of that was being a member of the Harvard Women’s Swimming and Diving team.”

During year-round workouts that each lasted about an hour and a half, Beth usually swam about 100 laps of 25 yards each. Her senior year, during peak times in her training cycles, workouts could be two hours and 3,000 yards, almost two miles. Six days a week. Despite recurring bursitis in both elbows, she continued to set new U.S. Paralympic American Records at Harvard home meets. 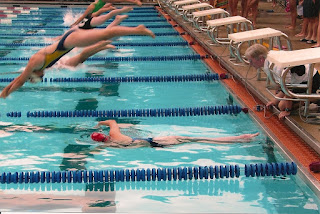 “No matter what team we raced against, people always came up to me and congratulated me. It was kind of strange sometimes, but I guess it's great for them to see someone with a disability compete on a college varsity team.”

After competing in Belgium with the U.S. Paralympic National Team, Beth qualified for the 2007 Parapan American Games in Rio de Janeiro. Peggy was named head swim coach for Team USA at the games. Co-captain, Beth earned four medals: one bronze, two silver, and one gold. During a medal ceremony, on the tallest stand wearing gold, she listened to the USA national anthem playing—for her.

“Rio was an absolutely amazing experience. Hearing our national anthem while on the podium is something I will never forget.”

Beth planned to be on Team USA for the 2008 Beijing Paralympics. She had declined her spot on the 2004 team to start college. After her senior season with her college team, she continued to work with Harvard coaches to prepare for Trials. And China.

“Thanks to four years of HWSD training, I know I am ready to take on my international competition in Beijing!"

To get to the Paralympics, my flight lasted thirteen hours. There were only two events for S3 women, both 50 meters. Beth had been ranked 7th and 8th in the world in those events in the months leading up to Beijing—before three newly-classified S3 women entered the rankings in the top five.

“It truly is an honor to represent the United States at the Paralympics and to be part of such an incredible team. Go USA!”

I watched intently as Team USA joined the athlete procession in the massive stadium. I found Beth, but she couldn’t see me. She let Peggy push her manual wheelchair, a rare concession, to save her strength for racing.

“You're surrounded by Team USA and you go down the ramp to the floor of the National Stadium which has 91,000 screaming fans. It was a pretty surreal experience.”

Beth made finals for both of her events. For her first five years of competitive swimming, the double-arm back was her fastest and the stroke she usually used for freestyle races. By Beijing, after countless laps and increasingly intense training, her forward freestyle emerged at the top.

”I felt prepared going in from all my amazing training at Harvard behind me and I was able to enjoy the moment as my heat was paraded out onto the deck and behind the blocks.”

Peggy waited at her lane, lying flat on her stomach with her body on the deck and her shoulders and head over the pool. The coach reached down, grabbing ankles and touching feet to the starting wall, for maybe the hundredth time. I watched Beth float parallel to the lane lines, then turn on her left side with her right arm straight and pointing the way.
When the eight S3 finalists left the starting wall for the 50 Free, most swam the backstroke. Beth’s forward freestyle looked smooth and beautiful, like a work of art. I cheered as loudly as I could, but she heard only an enthusiastic din from the packed Water Cube.

Beth set her fourteenth U.S. Paralympic American Record at the 2008 Paralympics. Eleven records still stand today. Swimming opened windows to a wider world for both of us. I am grateful for the interesting places we visited and the extraordinary people we met.

“What a great race!”

A lifelong disability advocate, Cindy Kolbe managed group homes in Ohio and ran a non-profit in Massachusetts. She currently lives in Summerville, South Carolina, where she recently completed a memoir. An active mentor and volunteer, Elizabeth Kolbe is employed as a health policy lawyer in her favorite city, Washington, DC. Cindy’s new blog shares her adventures with Beth at www.strugglingwithserendipity.com/blog
Labels: archived, health and wellness, other interests