Camping in The Sierras

In August, the hubby and I went camping with the Walking Trout Foundation. We had met Steve and Charles at the Triumph Foundation Sports Festival in Los Angeles in April. There were these two guys in their forties, sitting by tents that were large enough to accommodate wheelchairs - I was intrigued. However, I became an RV camper while I was still able-bodied so the last time that I slept in a tent, was 1998. I grew up tent camping and I loved it; there is just something about waking up in the mountains in a tent. However, the idea of sleeping in a tent as a paraplegic did not seem like a lot of fun. Steve explained that they take care of everything and it is at no cost to the campers including a guest of their choice so I decided to give it a try! I am always up for an adventure and Steve and Charles were VERY persuasive.
The Walking Trout Foundation is a group of friends who are longtime backpackers and campers. After years of backpacking and camping together, the guys decided to help take people with mobility limitations on camping trips so they could experience the beauty and majesty of the Sierras.  In 2013, Steve and Charles advertised the first trip by posting flyers at rehab facilities. Tents, sleeping bags, and vehicles were rented, and Steve and Charles took 13 people they had never met to Rock Creek Lake in the Eastern Sierras. The trip was a great success, and the Walking Trout Foundation was born.

The trip began at the Mount Whitney Fish Hatchery. The fish hatchery was beautiful and we 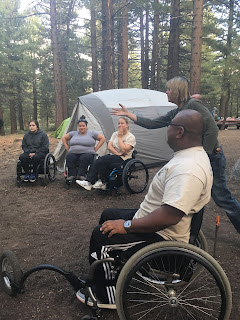 had a wonderful picnic lunch. Charles and Steve did an amazing job of getting everyone talking and getting to know one another. I was a little nervous about going on a trip with 10-15 strangers but it did not take long for us all to be chatting. By the time we were finished with lunch and a quick self-guided tour, we were on our way to Mammoth Lakes, CA.


We arrived at Old Shady Rest Campground to find the group site already set up for us. There was even Bocce Ball and Horseshoes! The campground was covered by large shady trees and the sites were spaced apart and private. The restrooms were large and clean including toilets equipped with accessible seats and handles with a paved pathway, leading to them. The tents had larger openings and there were sheets of wood placed over the entrance to the tent, making wheeling inside easier. We had the option of a cot or a pad on the ground, surprisingly was more than comfortable. As I went to sleep the first night to the sound of nature, I remembered just how much I had missed sleeping in a tent.

After settling in, the guys began preparing supper while we campers sat around the campfire. It was such a fun group of people from ages 18-60's. It was interesting learning how we all ended up on this trip. As I was visiting, I noticed that the Walking Trout guys literally NEVER stopped moving and making this trip the best experience it could be; it was this way for the entire trip. Every detail was perfect from the accommodations provided, to the activities that they had planned for the weekend. 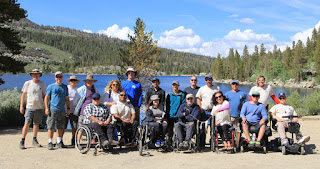 The next day, we woke up to a crisp, chilly morning and coffee around the fire. After a hearty breakfast, we drove to Rock Creek Lake located between Mammoth Lakes and Bishop, CA. We had a relaxing lunch and did some trout fishing. The hubby and I, brought our beach chairs from home and found a shady spot to enjoy the view. Again, we were treated to a wonderful lunch and afterwards, headed to a short hiking path, near a beautiful river and bridge. The path was fine for power chairs and with help, the manual chairs did fine. The guys with the power chairs were having a blast, whipping around on the trail. After our "hike" we headed back to camp for supper and another beautiful evening around the fire.
Morning 2 was the eclipse. What a treat to be in the Sierras for this event! We drove to a local overlook and were given special glasses to view the eclipse; it was magnificent! We loaded up and headed for Devils Postpile. We met the ranger who welcomed us and shared that Devils Postpile is an ancient lava lake that cooled and left these columns or "posts" of basalt rock. He went on to explain that the park was participating in a study with the intention to make the National Parks more accessible to the disabled. We were each given a survey to fill out. I have traveled to a lot of parks and this was one of the most accessible and very accommodating. 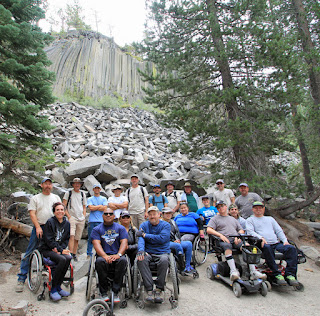 We were escorted to the trail by a young ranger that was very informative. The path to the Devil's Postpile was 0.4 miles and was hard packed at the beginning and not too hard to navigate in my manual chair and the power chairs did great. There was only one hill that I needed help going down and then a push back up at the end. When we reached the Post Pile, the ranger told us all about the area the natural formations and the history of the park and then went back to the ranger station for a picnic lunch.

We finished the day with a trip on the Mammoth Mountain Gondola. Boarding the gondola was easy since they stopped and provided a ramp. The trip up to 11, 053 feet was amazing! Since we had so many wheelchairs to load, we stopped along the ride frequently. This made the experience even better! We had the time to really take in the scenery. At the top, there is an interpretive center that was very interesting. We also spent time on the observation deck taking in the awesome view! The ride down was just as magnificent.

We closed the day with a supper of fresh trout that had been caught on our trip to Rock Creek Lake. At the campfire on the last night, we were all exhausted but trying to stay up as late as we could to visit with one another. The last night was also the "joke" night we were told. Everyone had the best time laughing and trying to outdo each other with the best jokes. It is amazing to me how close we all became in those 3 days. Walking Trout provided us with a 10 Star experience! They worked tirelessly the whole weekend to make the trip amazing as well as accommodating. 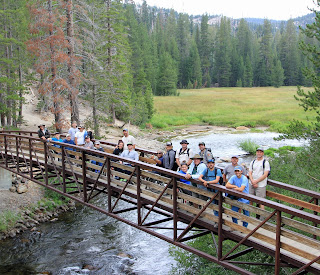 Each one of us on the trip had very different journeys that led us to that campground in the woods of Mammoth Lakes. Some of us had been in chairs longer than we had not and some were in the early years. Some of us even shared that at the last minute, for many reasons, we almost backed out of the trip. We came together because of a selfless group of guys who said: "Hey, we love this! Let's share it!" These guys are not physical therapists, counselors nor experts in the disabled community. Although they are experts on disabled camping by now.:-) These guys have jobs, families and busy lives. The work before, during and after these trips, is enormous. I am so grateful to have this experience and the people I met, will be lifelong friends. We are even planning a reunion picnic for the end of October.
Tent camping was a huge part of my childhood and an even bigger part of my early dating and married life, with my husband. We bought an RV when we had children, but always said we would continue to tent camp. Then I was injured and tent camping seemed to be over for me. Walking Trout gave us that gift back. We rediscovered our love of being together in the simplicity of a tent. It was just like it had been before and it was wonderful. We are now tent campers again! The hubby and I are planning another tent camping trip for early October, the RV might be collecting some dust while we are away.