People with disabilities often have differences in appearance and body function that might affect body image. Even so, they tend to be left out of relevant research. Given that 1 in 5 people in the world have some type of disability, this seems like a major gap.

This summer, I lead a research study that I hope will begin to fill that gap. The goal of my study was to understand the perspectives of women with physical disabilities about body image and health.  To meet this goal, I did face-to-face interviews with 15 women via Skype or FaceTime. Doing so made it easier for women from all over the country to participate in the study. I asked broad questions, such as, “What does ‘body image’ mean to you?” and “What about your body do you like the most?”

Study participants were between 21 and 53 years old. They came from diverse racial, ethnic, and educational backgrounds. They had many different types of physical disabilities including cerebral palsy, spina bifida, various genetic conditions, spinal cord injury, and amputations with and without the use of prosthetics. Despite these differences, many women shared similar ideas and experiences, described below.

As mentioned in a previous article, mobileWOMEN.org is thrilled about an exciting new partnership with Travel for All, a travel agency specializing in accessible travel. These mobileWOMEN understand firsthand, the challenges of traveling with a disability and have the knowledge, experience and passion to create a memorable vacation, custom designed to your specific wants, needs and budget.

Travel for All will also be organizing accessible trips that we will feature on our site and will be listed in our "Travel Opportunities" . They can also handle any of your traveling needs and have generously offered to donate a portion of the profits of each trip booked through our site, to mobileWOMEN.org. Although all of us including our contributors volunteer, we still have operating expenses such as annual website and domain fees, to cover. These funds will be used towards these expenses and improving the site. If you are interested in a trip and want more information, please contact Accessible Travel Specialist, Tabassum Chagani at tabassum@travel-for-all.com or call toll free at 1-888-993-9295.


The next exciting accessible trip organized by Travel for All : 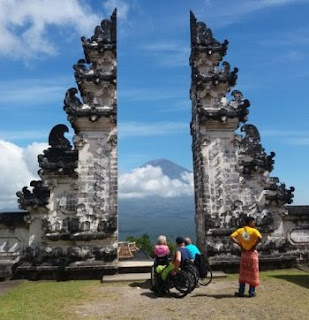 
A journey through the island of the gods! Balinese culture is embedded in a breathtaking countryside of volcanoes, tropical forests, green paddy fields and the blue ocean.