My Non-Surgical Quest for a Pain-Free Shoulder - Part 1 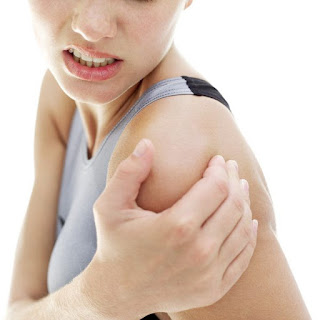 
IIt all started about 11 years ago when the side of my left upper arm began to ache. It was one of those aches that is just kind of always present and didn’t really matter what I did or did not do. Keep in mind at this point, I had been paralyzed for 25 years due to a C5/6 level Spinal Cord Injury that I sustained in a motor vehicle accident. To say that my arms have been overused is probably an understatement! Given that the prevalence of shoulder pain rises to a peak of 50% of the general population ages 55-64 years old and much higher for wheelchair users, it is unfortunately a common problem.
I first went to my general practitioner who thought I was having an inflammation issue and recommended that I start taking large amounts of Advil, several times a day. I wasn’t thrilled about it but if it was going to remedy the situation, I was willing to try it.


After a month or so, this pain was still present and it didn’t seem like it was helping at all. It was also recommended that I go to physical therapy to exercise my shoulder and rotator cuff along with ultrasound therapy on the side of my arm. I had some slight relief but the pain still lingered so finally I was referred to an orthopedist.. After having an X-ray, she pointed to the tiniest microscopic dot and told me that was calcification forming which was causing me pain. I was finding it hard to believe that such a tiny speck on the x-ray could be the source of so much discomfort. I was also confused because it was the side of my arm that hurt not my shoulder. She explained that it was called “referred pain” which is very common with shoulders. She gave me a steroid Cortisone shot in the shoulder and told me to keep exercising.

Within a day, my pain was actually feeling so much better and I was thrilled that it was such a simple fix. About every six months, I would visit the orthopedist and she would give me another shot. I was told that I shouldn’t get them too often as it could compromise the tendon but every six months was completely safe.


Gradually, the shot did not last as long and the pain was increasing. I was going about every four months until  my orthopedist retired. I was ecstatic to find another orthopedist who actually worked with professional baseball players so had a lot of experience with injured, overused shoulders.


He too took x-rays and I had much more calcification than before and some arthritis. He suggested that I possibly get surgery but I wanted to try every option first. We continued with the Cortisone shots but he also referred me to a specialist who did a procedure called “ultrasound guided barbotage“. 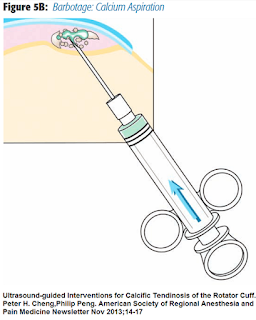 When I met with the new doctor, I wasn’t sure what to think. After seeing my X-rays and doing an ultrasound, he painted a bleak picture; I was the worst case of calcification that he’s ever seen. He told me “ You could get surgery but it will be a disaster for recovery. You could do nothing and you will be miserable or we can try the ultrasound guided barbotage and that might work.”  Given these negative options, I chose the latter.


I changed into a hospital gown and was able to stay in my wheelchair. First he cleaned the area and then numbed it by injecting all around my shoulder. Just the numbing was painful so I wasn’t looking forward to the actual procedure.


After the numbing took affect, he used the ultrasound to find the spots of calcification. He then injected a long syringe and moved it back-and-forth breaking up the calcification. The movement kind of reminded me of someone getting liposuction on television!. Even though my arm was supposed to be frozen, the pain shot down my arm and I must admit that I used a few choice words to get through it. It took about 20 minutes, I think, but felt like an eternity and then he gave me a Cortisone shot to help the inflammation from the procedure.


I had to keep my arm moving so as not to get frozen shoulder and slowly went back to doing exercises. I saw him about every six month. At this point, I had pain in both shoulders so we kept doing the procedures on both shoulders for a total of three per shoulder.


The good news is that my right shoulder gradually got better and has not had any pain there since! Keep in mind, I have omitted all exercises above the shoulder, as recommended by the doctor.


There are a few important factors that I would like to emphasize. I have been susceptible to urinary tract infections since my injury and I’ve taken a lot of antibiotics, over the years. One of those being Cipro which I took off and on. One day, I noticed a warning that it can be harmful for your tendons and my doctor confirmed this was true! I have no idea how much this contributed to my shoulder problems but I wish that I would’ve been more thorough in my research and asked for an alternative drug. The second main point is after years of getting Cortisone shots, one of the nurses was going over the post-procedure care and happen to mention that my blood sugar would rise temporarily. I found this interesting because I had recently had my blood sugar checked and it was told that I was becoming insulin resistant. I was shocked that no one had mentioned it before so that I could’ve been more careful in regards to my diet. Thankfully, it is temporary but definitely motivated me to find other options for my left shoulder. Lastly, I recently learned from my urologist  that Cortisone can make you more susceptible to urinary tract infections so be aware of the side effects of Cortisone,  prior to an injection.


Stay tuned for Part 2 to learn more about my non-surgical quest for a happy and healthy shoulder.